My trip to Saint Petersburg on December 28th, 2020

I wish, I wish I could see the original “Chartwell pool” by Sir Winston Churchill.

Undoubtedly, the beautiful, full of history city of Saint Petersburg, or Leningrad, as I remember and do still very often identify the Northern Venice of Russia, is beautiful at all the times of the year and during all the four seasons. Nevertheless, verbatim, the Neva’s oceanic blizzard winds blowing in autumn or winter cannot be exactly propitious for walks and sightseeing through the City of Peter The Great. Thus, I can say that I was lucky with the weather visiting Saint Petersburg on the 28th of December, 2020. It was neither cold, nor hot; no frost biting howling, snow whipping wind gusts. Just slightly freezing boreal early morning, right after my arrival and somewhat pinching of cold, but not really scary Baltic Arctic winds at the Winter Palace – Dvorzovaya Square a couple of hours prior to my departure.

That Monday turned out to be a very good day for roaming the sidewalks of the Nevskij and Ligovskij Prospects, for strolling over Sennaya Square, for discovering on foot again and again the central part of this very historic, architectural treasure trove metropolis, called Saint Peter! 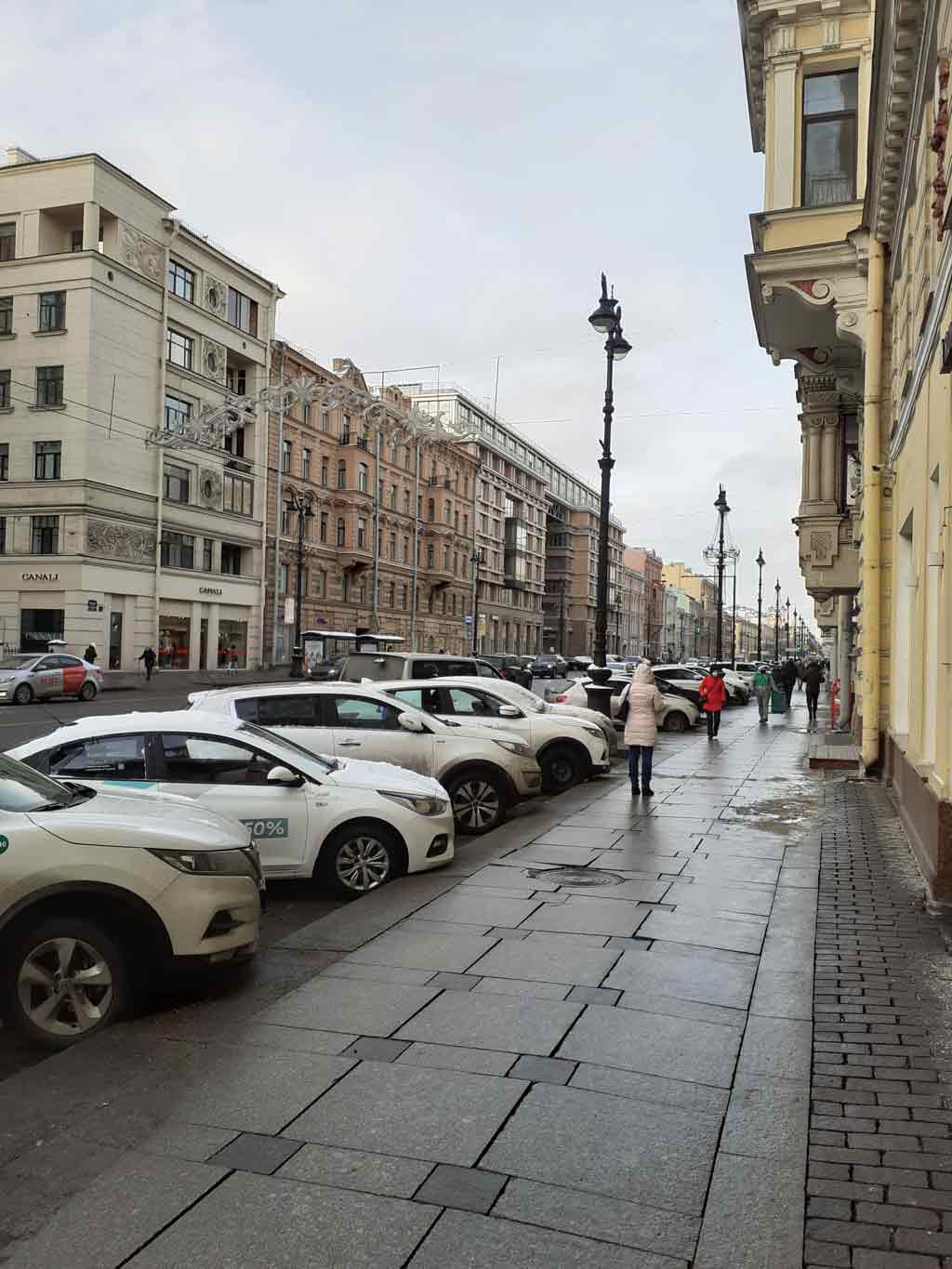 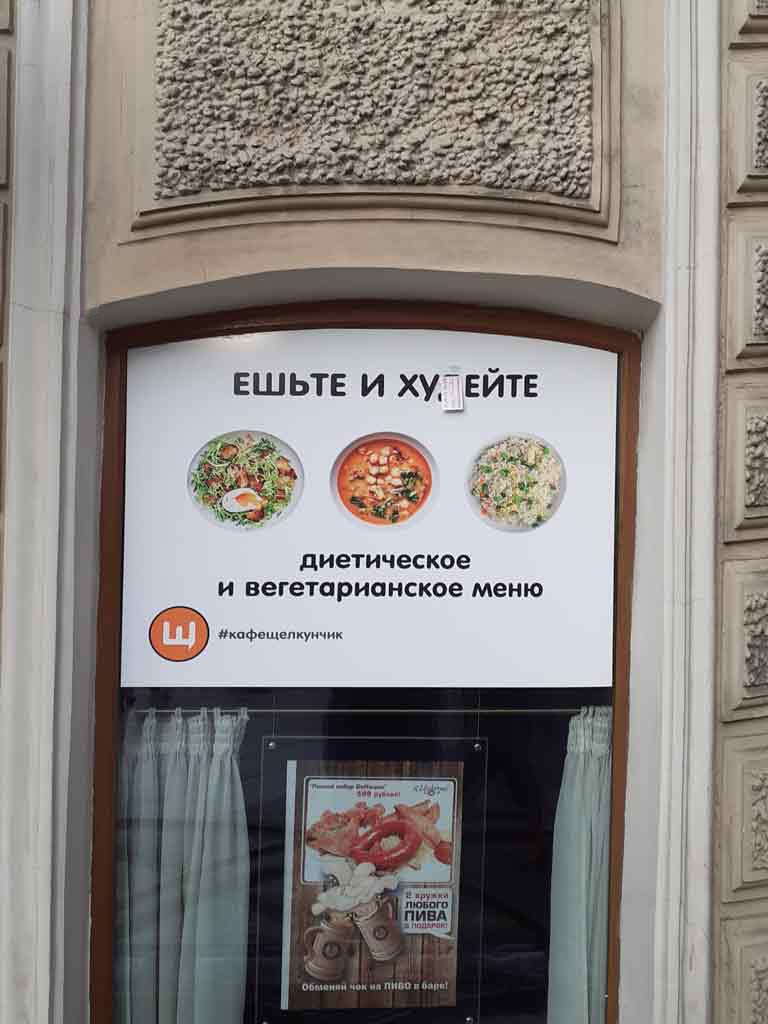 Although, the purpose of my visiting the city on Neva River was not the sightseeing, but being in Saint Petersburg and not having the feelings of inspiration and excitement from its landmarks is simply impossible. I also decided to try to research again the availability and the prices’ levels of the Vegan street food in this city of my greatest affection and attraction.


My early morning, still enshrouded by the Nordic twilights started at the “Lavka Pekarya”, or the “Baker’s Shop” (in Russian language: «Лавка Пекаря» ул. Херсонская – 24) at Hersonskaya street – 24. It is a very cute and cozy eatery, with a good Vegan menu, of various breads and drinks. Prices are more friendly, than in other bakeries of Saint Petersburg, and, consequently, much more cost efficient, than in the other cities of the Russian Federation. For example, the garlic bread baguette, of a very substantial size, does cost 54 rubles (or was it 57 rubles?..). Which is the best price for such product, which can be paralleled only with the bakery shops across the Neva River, not far from the Baltijskij Dom Theater and by the bakeries of Sergijev Possad. Or, possibly, by some bread shops in Kislowodsk and Pyatigorsk. There is also very substantial variety of fruit drinks, coffee and tea at “Lavka Pekarya” and its interior design looks very inviting and comfortable to spend 20 – 40 minutes of Your free time early in the morning. When all the cityscape outside is covered with the deep lilac darkness, “Lavka Pekarya” is full of light, warmth and very nice Vegan food!

As I am touching upon the topic of the Vegan food in Saint Petersburg in this brief essay of mine, I think, I should be also mentioning two very interesting places in this respect. Namely, the “Balzac” restaurant at the Mayakovskaya street – 14 (in Russian language: “Бальзак” / ул. Маяковского – 14) and the “Hao Chi” restaurant at the Anglijskij prospect – 48 (in Russian language: «Хао Чи» / Английский проспект – 48). Variety of the vegan – vegetarian interesting options at the menu, customer friendly prices (considering, that these are the restaurants, not the fast food outlets), interior design and decorations, locations of these eateries.

For example, at the “Balzac” You can / might be seated into the marvelous huge red gilded arm chairs, which would transport You (like teleportation), almost as the magic carpet, into the epoch of the 18th – first half of 19th century in France, of the Parisian socializing life and adventures of that period of time.

From the windows of the “Hao Chi” eatery one cans see very cute city garden, and the fact that the Chinese cuisine restaurant is being located at the street, called “Anglijskij prospect”, what literary means “English prospect” does make the visit to this culinary loci very special, intriguing and exotic. And how cute and picturesque are the little gold fishes, and not only them, in the aquarium bowls of “Hao Chi”!

English Prospect, the public garden looking like the part of the London cityscape scenery… Unhurried, no hustle and bustle atmosphere, very cute little fishes, many of which were / are gold… I thought about Sir Winston Churchill’s paintings: “Goldfish pool at Chartwell” and the “Goldfish pool”. Very expressive in its gentrified, countryside Englishness works of the fine arts. And at the latter depiction, I think, it is possible discern some oriental, Chinese motifs and broodings, as perceived by the Author of these canvases. I wish, I wish I could see the originals of these paintings. 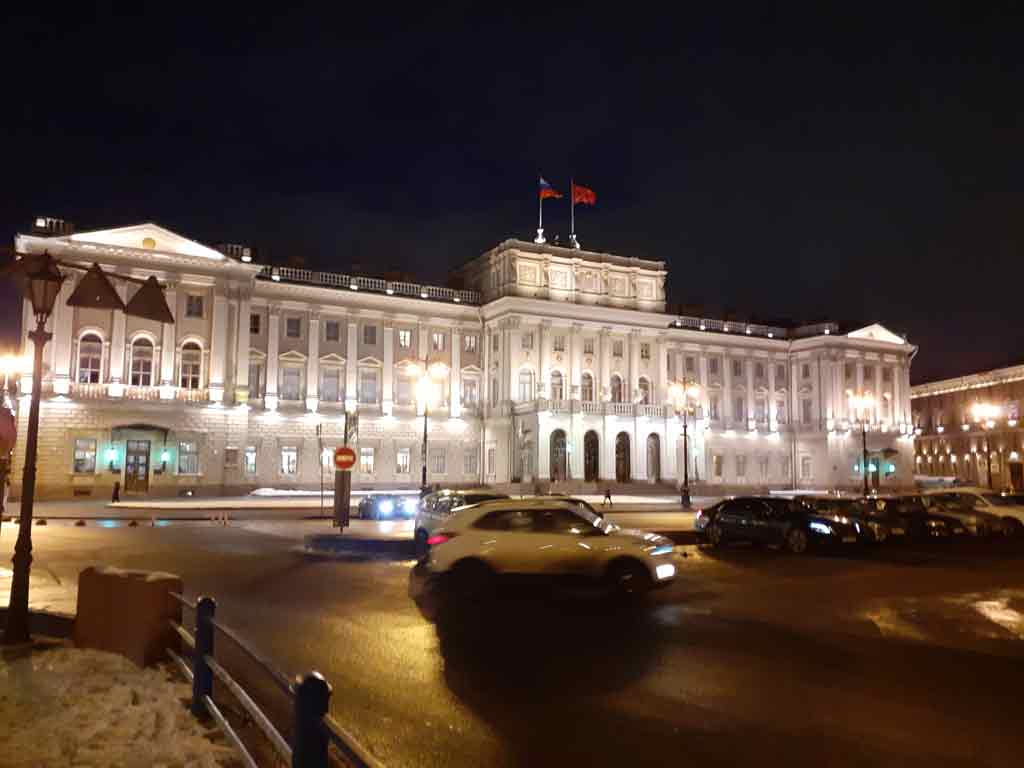 The menus of the both restaurants the curious tourist – visitor can find at the respective web sites. But if one had to create the associative rows – sequences of thoughts, characterizing each of the two places. I, for example, would invent the following: “Balzac” – France beautiful Scarlet Golden Armchairs / mushroom dishes / Indian Asian vegetarian cuisine / mushrooms – vegetarian soups… Brute Duke de Cherence! France! France!!! France!!!

“Hao Chi” – mysterious aquarium bowls / Chinese vegan – vegetarian cuisine / wood mushrooms – deep fried eggplants – pineapple sweets… Sir Winston Churchill… British Hong Kong. And, of course, the desserts, the desserts at both places! …As well as the French fries and the basmati rice at the “Balzac”! And all these worldwide mental culinary journeys in one city, in Saint Petersburg!

…At the same time I was quite disappointed with the two places, which during my previous visits of Saint Petersburg I liked very much. The Vegan ambience, the menu, the level of prices. For example, the complex “The Floors” (in Russian language: «Этажи») on Ligovskij Prospect was a very cozy and interesting place in Vegan Vegetarian respects. This time, at the end of December 2020, under the pretext of fighting, trying to prevent the spread of COVID – 19, most of the food outlets did disappear, were closed… Though several were allowed to remain open… But… but… they were / are either non Vegan, or with the predominantly non Vegan menu, and the level of prices in them was 3 – 3.5 (three – three and a half) times higher, than in the food kiosks, which used to cater to the customers at the same location… And no falafels, or hummus. The menu choices became quite mediocre and unattractive… Why the very cozy, rather inexpensive outlets were not allowed to stay at “The Floors”? They decided to leave the premises themselves, or were supplanted? Pushed away?.. 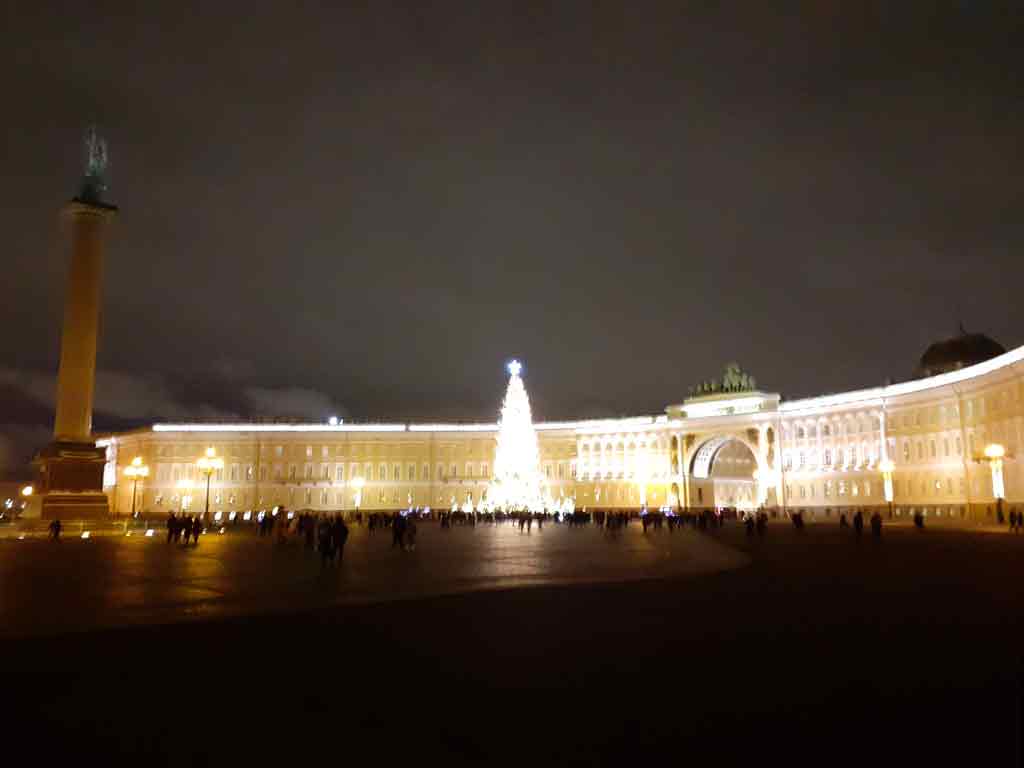 …Also, I would say, epic donuts shop (in Russian language: «Пончиковая») opposite side from the Oktyabrskaya Hotel on Ligovskij Prospect. It was renovated, and it does look very clean and tidy… But where is the big stainless boiler with cacao? Where are those bowls with cinnamon and sugar powder, from which the corpulent sales ladies showered with spoons fresh fried Vegan donuts… Possibly, I am simply nostalgic… But the prices for the donuts did increase almost two folds, if I am not mistaken. Though, that might be attributed to the general economic conditions or certain inflation and has nothing to do with the renovation. But, honestly speaking, I feel quite sad, that the old version of donuts shop did cease to exist… There was certain warmth and coziness in it, as far as I remember. It felt quite homely there. It was full of charm and pastries Geist!

And, as always, I was very pleased and gladdened with the Market at the Sennaya square. There one can buy quite good fruits and vegetables for very customer friendly prices. Which are way much better compared with the most of the markets and shops not only in such advanced in the matters of customers treatment city as Saint Petersburg. But also compared with the rest of the Russian Federation. For the Vegan – vegetarians the Sennaya square market is really a place to be during all the seasons of the year. The variety of fruits and vegetables, and the prices are very good! 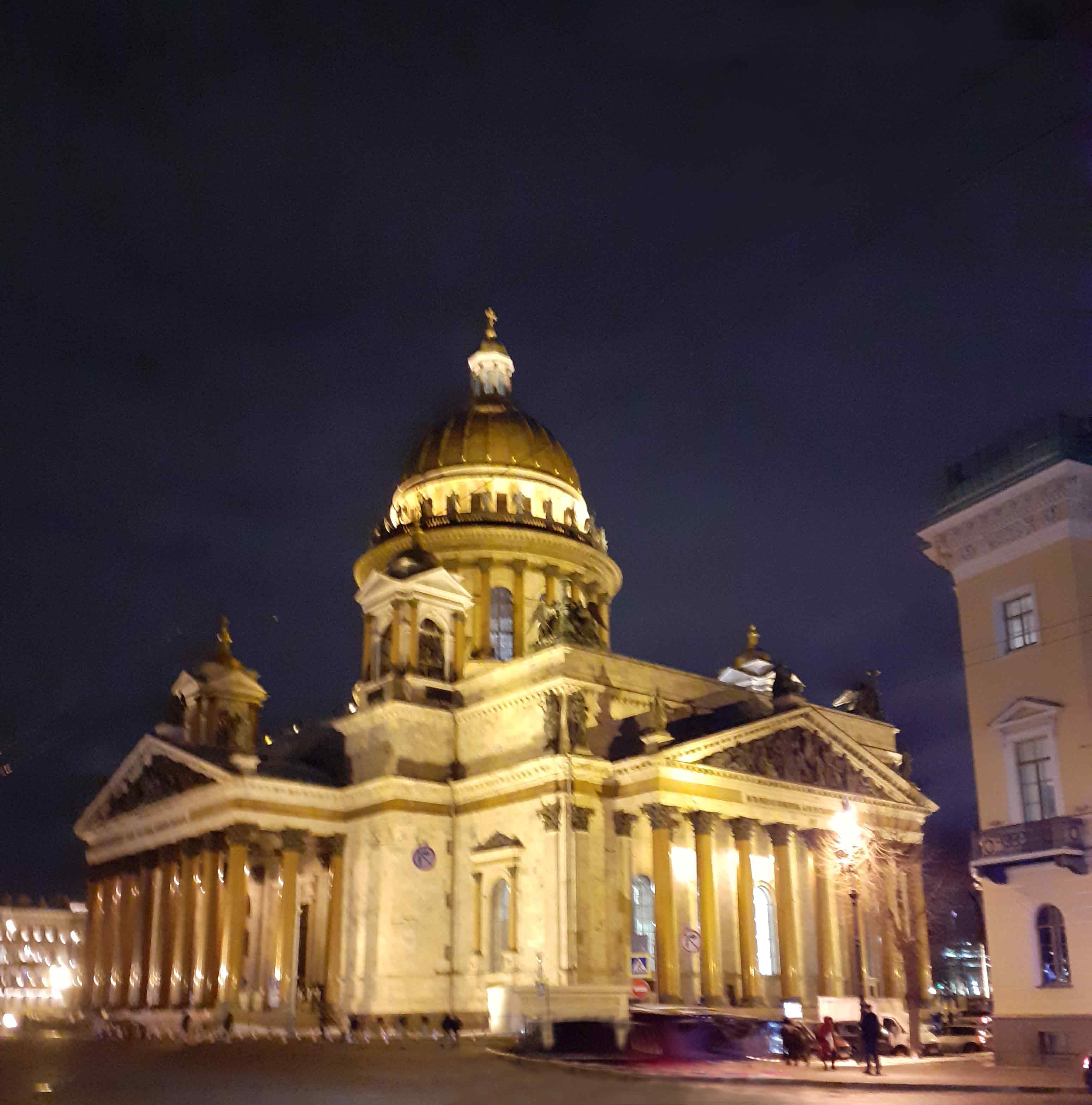 …No… this time, this visit of mine to Saint Petersburg was not the sightseeing one. Far from being so. But still, even simply walking the prospects and streets of this marvelous city would, undoubtedly be a very health salubrious, very cultural and educational experience…

And during my strolls over Nevskij Prospect, Hersonskay street, Sennay square, Morskaya street and other loci from early morning till the evening, I thought about the Vriezenveen community and society of Saint Petersburg in the 18th, 19th and beginning of the 20th centuries. About the trade and social activities it conducted at that time at the Capital of Russia.

I also pondered, that it would very interesting to research the theme of the Vriezenveen community in the archives of Saint Petersburg and write and the article, or even, probably, the book on this issue.

Saint Petersburg is a very romantic, beautiful, educational and gourmet destination during all the seasons, through all the 365 days and nights of the year! The one who did not visit this City of Peter The Great did miss a very big part of the history of Humanity and its heritage.