I have decided to share my experiences from a very cute and interesting journey to Sergiyev Posad (in Russian language: Сергиев Посад), the town in the region of Moscow, which is located to the North East from the capital of the Russian Federation.

…Of course, it would be very correct to say, that when we talk about the history and development of Russia, its Arts and Spirituality, one of the first Names, which comes to mind is Sergiyev Posad. The town full of architectural, fine arts timeless Landmarks dating back in history to centuries and centuries before today. As the reader very well knows, Sergiyev Posad is a part of the Golden Ring of Russia.

…But as I realized during my journey that not only the historical treasures in stone, lime and wood can constitute the just pride of this very beautiful town, but also the culinary achievements and accomplishments of the most traditional Russian, for centuries matured cuisine. Namely, the “postnaya” (in Russian language: “постная”) cooked dishes. What can be also interpreted as the Vegan cuisine, as it does contain neither meat, nor fish, nor egg components. Though, some of the postnaya cuisine recipes, by definition, do include the fish ingredients, but they are not the subject of this narration.

This commentary of mine does concern itself only with the postnaya – Vegan (meaning: containing no meat–fish–egg ingredients) delectable street food, which is easily available in Sergiyev Posad. And for me, as being the Vegan-Vegetarian for quite many years already, it was a very pleasant surprise to encounter those victuals in Sergiyev Posad. Those delicacies are being distributed under the brand “Sergiyev Kanon” (in Russian language: «Сергиев Канон»), the site in the World Wide Web is «segiev-kanon.ru». And are available in profusion in the shops and street stalls around and in the premises of the Trinity Lavra of St. Sergius (in Russian language: «Свято – Троицкая Сергиева Лавра»), at the address Prospekt Krasnoj Armii, 133 (in Russian language: «Проспект Красной Армии, 133»).

In the beginning of my account I would like to thank wholeheartedly Marina Grin, the Executive Director of ANO “Monastirskaya Trapeza” and Father Arhip, Cellarer of the Trinity Lavra of St. Sergius, for their very cordial welcoming. This meeting helped me realize better the development vectors of Sergiyev Kanon products, as well as the ways and paths of the daily functioning of the production of this brand. 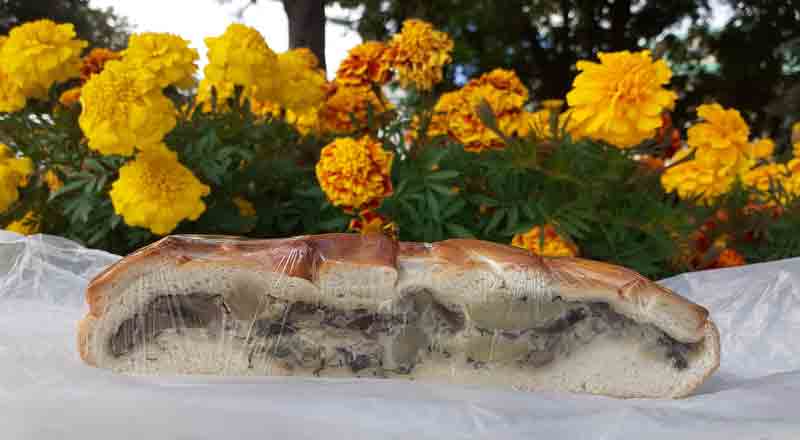 …As the assortment of the postnaya – Vegan production at the shops and stalls around the Trinity Lavra of St. Sergius is very large, I would mention only several items, which I had my personal delightful epicurean experiences with. For example, postnaya – Vegan coulibiac (in Russian language «кулебяка»), large sumptuous cabbage pie, 500 grams, with the price tag of 95 rubles. And Petrovski mushrooms-potato pie, which is also ornamented with various stuffings and sauces. Almost as big as coulibiac, a little bit more expensive, when purchasing half of the pie. Lo and behold: there are really plenty of very tasty porcini in this product! It is really a mushroom pie!!! (I am mentioning that, because in some other places, when buying something with the “mushrooms” name on it, later the customer might be discovering with utter disillusionment, that there are no mushrooms at all in that product. Like, for example, once I decided to try buckwheat porridge with white caps in some cafeteria… and there was not a single white cap or any other mushroom in that mixture…) And in Petrovski mushrooms-potato-pie there are plenty of the delectable porcini! 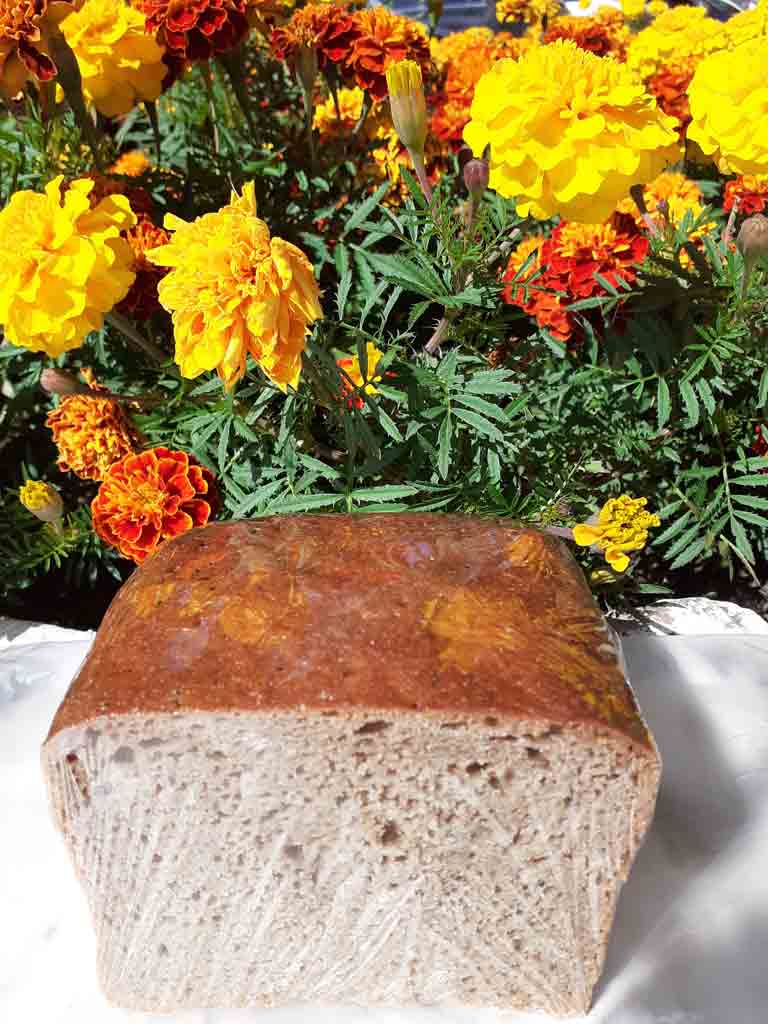 There is also the substantial choice of various postniy Vegan dumplings – varenyky («вареники») – such as with potato and mushrooms, with cabbage or with cherries. The most traditional bread of the Trinity Lavra of St. Sergius is yeast free rye bread (in Russian language: «ржаной бездрожжевой хлеб»). And there are many more types and sorts of breads produced in Lavra. For example, Cellarer bread with prunes and nuts (in Russian language: «Келларский хлеб с черносливом и орехами»), wheat bread (in Russian language: «пшеничный хлеб»). And many other postniy Vegan bread varieties one can be enjoying, while being in Sergiyev Posad in the vicinity of Lavra.

…But if one would be aspiring to define the most traditional edible product pertaining to Sergiyev Posad, undoubtedly, that would be Kovrizka (in Russian language: «Коврижка»). Sergiyev Posad Kovrizka comes in several varieties: Kovrizka as such, Kovrizka with dried apricots and raisins, Kovrizka with walnuts. …Most sorts of Kovrizka do contain honey, and, thus, certainly, Kovrizka is postniy-vegetarian (although, not vegan) product. And it’s really a gourmet cuisine!

There is also a plentitude of other sweets and pastries presented at the shops and stalls at Prospekt Krasnoj Armii, 133 (in Russian language: «Проспект Красной Армии, 133»). Most notably, the famous Monastery cake – prianik (in Russian language: «Монастырский Пряник») with a delightful fruit jam filling. It is highly delectable epicurean cake – cinnamon bread, which can be found mostly only in Sergiev Possad. …Generous variety of pies-pirozki (in Russian language: «пирожки»), as well as different cookies, „Rum Baba” («Ром Баба»), rolls would complement the dietary pallet of The Lavra food, and would make every vegetarian – vegan traveler feel very good! 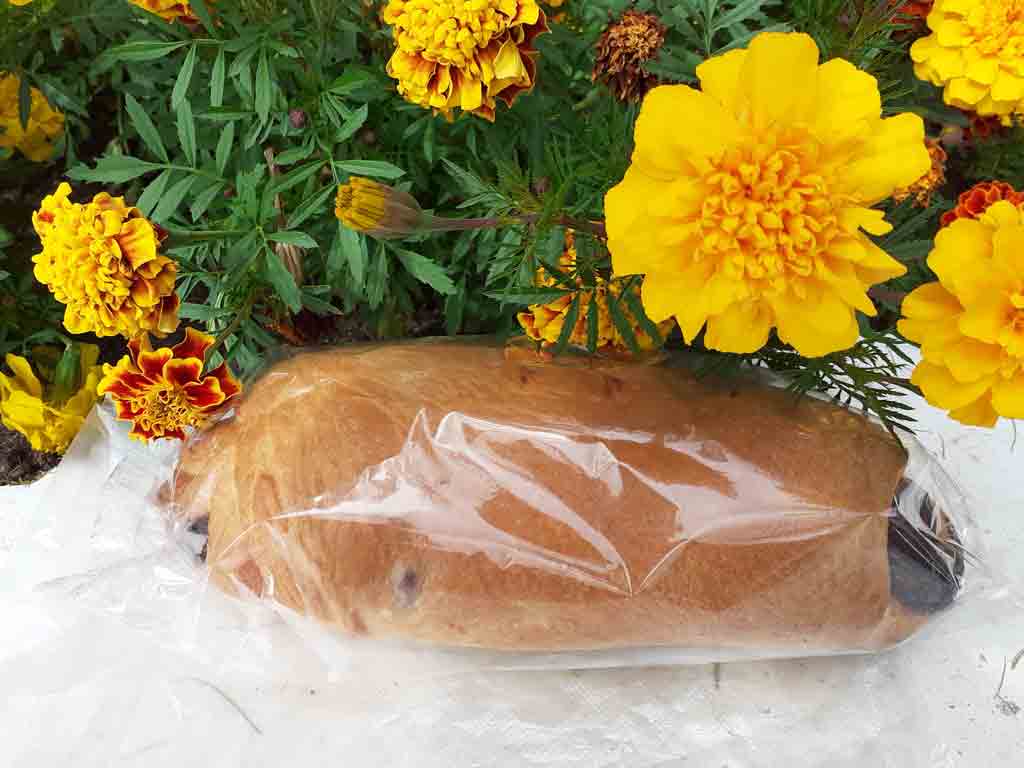 …I would like to recollect, that the blackcurrant roll was truly remarkable. And at 44 rubles for its 350 grams is a very good deal for the Vegan traveler with the sweet tooth, or simply desiring to have a cup of tea with the traditional Russian pastry. 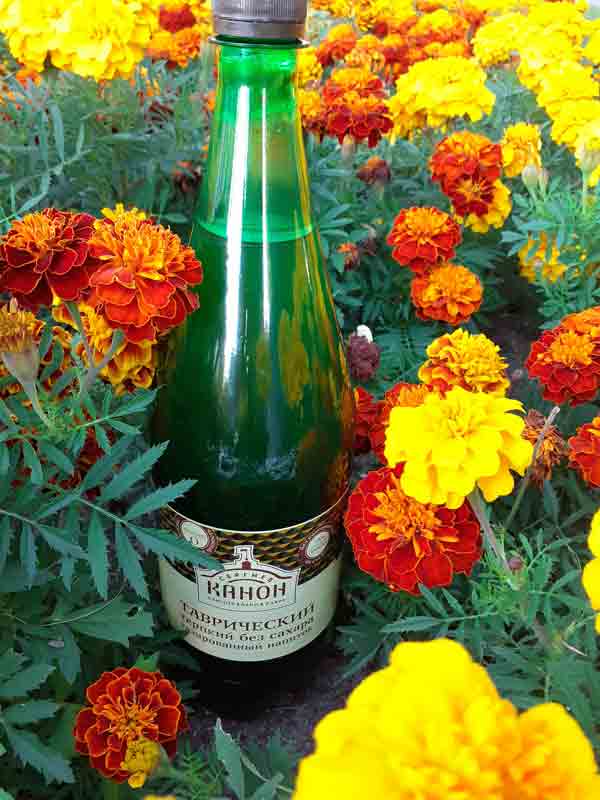 The range of the refreshing soft drinks of the Sergiyev Kanon brand (naturally, non-alcoholic ones) is truly diverse. For example, “Tavrichesky sugarless refreshing tart drink” (which includes also the juniper extract), or “Antonovka apples carbonated drink” and many many more carbonated drinks, lemonades, fruit drinks. And, of course, Sergiyev Kanon Kvass! …And I also would like to say, that the price tag of 100 rubles per 1,5-liter bottle of such rare drink can be considered as very customer friendly. …And it will be very nice to try the new sorts of Sbiten drink, which are currently being developed by Sergiev Kanon, according to the representatives of this organization.

…If talking about non factory produced postnaya-Vegan street food, I would like to refer and point out the produce of the Bread shop “Pancakes” («Хлебная лавка-Блины») across the road from the Utochnaya Tower / Ducks Tower (in Russian language: «Уточная башня»). 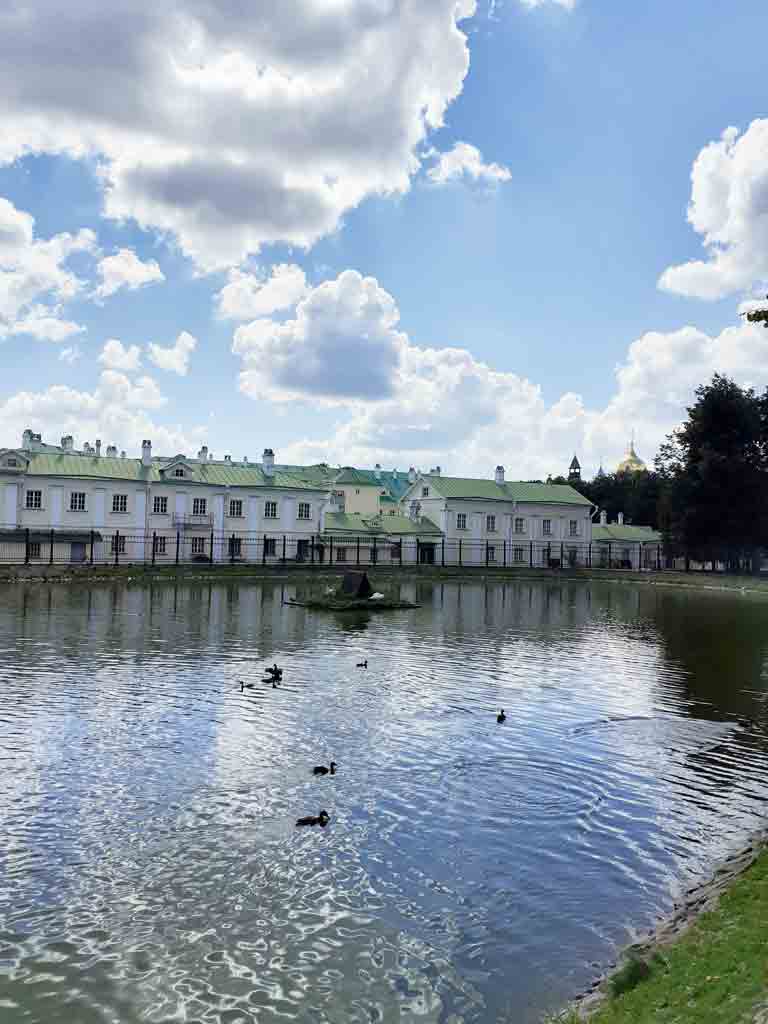 On Saturdays and Sundays it has the assortment of the postniyi Vegan pancakes, coming in three varieties: wheat, rye and buckwheat. …Nowhere in Russia, or anywhere in the world I traveled I encountered the Vegan pancakes of those assortments, especially, the rye and the buckwheat ones. And the prices for those products are the best ones anywhere in Russia (according to my personal travel experiences). There are also various stuffings for these pancakes: cabbage with mushrooms (and there are really mushrooms in it!), postniy Vegan Olivier salad, mashed potatoes with the fried onions. And some other ones. …And again I would like to comment that I have not encountered the Vegan pancakes anywhere in Russia, even not in Saint Petersburg, and the prices for the street food pancakes in the Bread shop – Pancakes («Хлебная лавка – Блины») across the road from the Utochnaya Tower (in Russian language: «Уточная башня») are the best and most traveler friendly anywhere in Russia. So if You want to try Vegan pancakes, then You should visit Sergiev Possad on Saturday and Sunday and stop by for a snack at this Bread shop – Pancakes («Хлебная лавка – Блины») across the road from the Utochnaya Tower…

…Of course, in matters of the Vegan food, Vegan street food, its argumentations, pros and contras, the best and the only proof is the personal experience. Reading about victuals is not exactly the same like tasting them… But in conclusion of this short account of mine I would like to resume saying that the assortment of the postniy-Vegan-vegetarian traditional Russian street food and drinks in Sergiyev Posad, its availability and prices are, possibly, the best in Russia, comparable only with the city of Saint Petersburg. 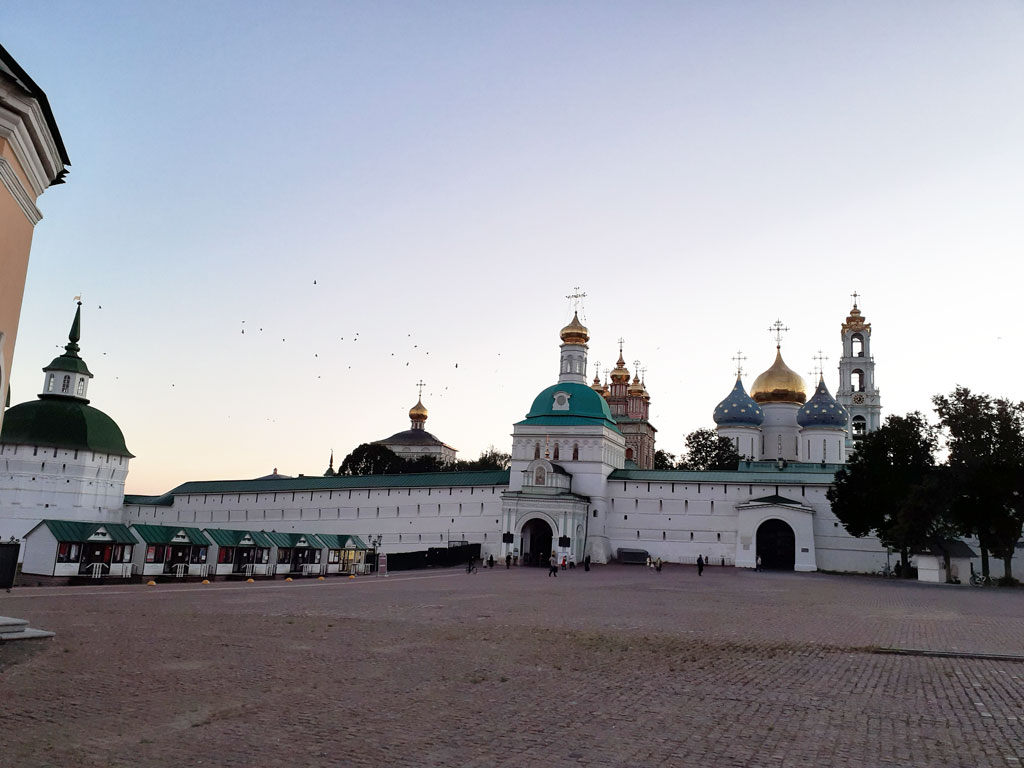 …Sergiyev Posad (SP) and Saint Petersburg (SP)… Two SPs… and, most likely, the two major Vegan cities in the Russian Federation. If You want to experience traditional Russian food and drinks, either in the street food setting, or simply buy it fresh and ready from the shops, then Sergiyev Posad is certainly must be on Your travel list. This town has preserved the History of Russia not only in stone, lime and the Works of the Fine Arts but is also safeguarding the culinary traditions from the days of yore up to the present day.